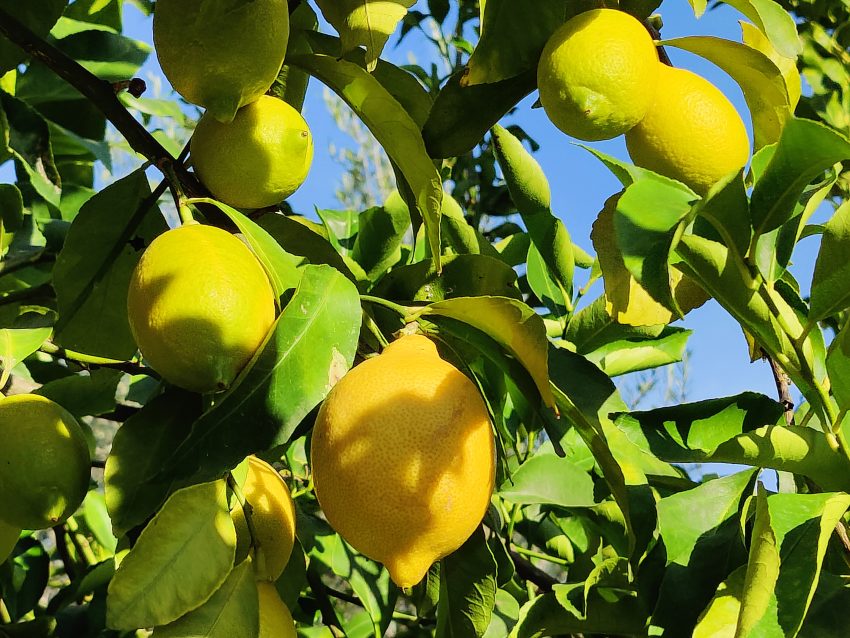 It’s been a busy week on the quinta with many small jobs and tasks being completed.  A day of heavy rain put halt to outdoor work early in the week although this was soon followed by sunshine.  And lots of it.

Until now, I’ve not focused on the weather in Portugal.  I have to adapt to the heat and the dry spells and equally, adjust when the rain comes.  I can’t influence the weather, but I am paying more attention to the forecast as I make plans to work at the quinta, especially as I plan the olive harvest.

At present, I’m content to focus on what is already growing rather than planting lots more fruit trees or vegetables.  The fruit trees are looking incredibly fruitful (excuse the pun) and I’m going to need help using all the lemons! I’ve watched and heard of so many people who buy land in Portugal and then rush out to buy lots of plug plants and new trees, and perhaps don’t get the immediate results they were hoping for.  So, I’m just going to let it grow!

As my neighbours keep reminding me “pouco e pouco” [little by little] and “lento” [slow].  The latter is always followed by hand movements indicating to slow down.  Actually, I feel very measured in my approach, but perhaps I’m still putting in a little more work than the Portuguese might be doing.  Reminds me of an earlier blog – Sprint or Marathon.

This week I’ve also got the bike out and cycled to the farm.  The fastest route is on the main road, and as two-thirds is downhill, it’s quite fast.  49 km/ph fast.  At 2.7 km, it’s not the shortest route, but it is the quickest.

I took the more scenic, yet direct route, back.  This takes me on forest and dirt tracks along the route that gives the local farmers access to their land.  It has more of a gradual incline than the main road and it is exactly 2 km from gate to door.

Olive harvest – not quite yet!

I started the beginning of the week by scheduling my allocated time at the lagar de azeitonas [olive mill].  Organised through a combination of telephone and text messages got my slot booked, and I am (a little) more knowledgeable about the process.

Everything is scheduled for me to take my olives for pressing at midday on Tuesday 15 November.  Ahead of this, there is the small job of picking the olives.  They have to be picked in good weather (no rain) and looking at the long-term weather forecast, it was looking promising.

So I began planning and trying to estimate how long it will take to pick the olives, and get them to the mill within 72 hours of the harvest (although ideally within 48 hours).  Therefore, the harvest would take place over Saturday, Sunday and Monday.

However, on Monday, I picked the larger olives and started the process of brining them.  Every day I am learning more through a combination of reading, internet searches, conversations and watching YouTube.  And I am learning a lot.

The rest of the week, I’ve been gearing up to start the main harvest on Saturday.

But all plans were put on hold on Friday evening when I received a phone call to advise they have to postpone my scheduled time at the lagar.  However, after checking the weather forecast, there is a good chance of rain from Tuesday onwards for the remainder of the week so not particularly favourable to harvest the olives.

Therefore, following further communication with the President of the lagar, it’s now rescheduled for Tuesday 22 November.  So all my plans are just being delayed by a week.  The phone call was timely just twelve hours later I would already have started the harvest.

Two areas were being taken over by weeds, although there was an abundance of onions competing for space.  After a few hours on my hands and knees, the weeds have gone and the onions are looking good.  Now at the end of the week, and after the rain, they have already had a growth spurt.

The previous owner used an area for potatoes which has also succumbed to weeds.  However, like the onions, there is some encouraging growth from new potato plants.  I’ve been waiting a couple of weeks before weeding so the emerging potato plants were easier to identify and I didn’t inadvertently pull them up.  Weeding completed, I’m pleased with the number of potatoes growing.

In addition to the onions and potatoes, I have an abundance of peppers, various squashes, kale and cabbages, all without planting anything.  And the orange, lemon, quince and medronho trees are also looking very fruitful!

However, in the vegetable patch, I have begun tidying it and clearing some of the weeds.  Two areas just some small attention and this enabled me to get several broccoli plugs planted, as well as some red cabbage.

Three weeks ago, I had my SEF appointment as the final part of my D7 Visa application.  My application was successful and I was advised my residency card would arrive within the next three months.

However, on Tuesday I was stopped in my car by the postman (the UK numberplate stands out a little) who had three letters for me, one of which required a signature.

On opening the letter, I was delighted to receive my residency card.  A mere three weeks from my SEF residency appointment.  Once again, I have had a trouble-free experience with SEF. Given so many problems people have encountered with SEF and some of the horror stories that have been shared, I am perhaps the only person who would give SEF a five-star rating!

Maybe I’ve just had the luck of the draw. Although I put it down to my diligent planning and preparation which, has possibly bordered on OCD. But, in my opinion, given my smooth and almost seamless D7 Visa approval, it’s been worth the time and effort.

Let’s have a coffee

The week has rounded off with welcoming some friends to take a walk around my quinta and allow me to share my small piece of paradise with them.  Over the week I’ve enjoyed several coffees with new friends and enjoyed a meal with others.

While meeting new people hasn’t been particularly easy, those I have met have been so kind and welcoming.  Thank you to all those who have helped me as I make Portugal my new home.  Muito obrigado!

2 thoughts on “Let it grow! And residency card update.”