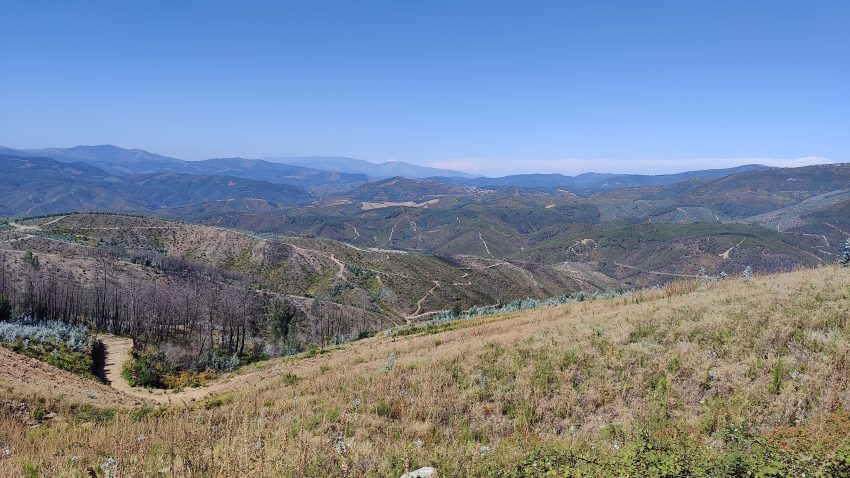 Strangely, the last week has not been dissimilar to the previous week.  Not that I am complaining because two substantial walks through the beauty of central Portugal is a pure delight.  And the property search must continue.

The first hike starts at the end of my road [Rua].  Fifty metres away and I’m on one of the county walks.  Three hours and 12km later, I return home.  This walk took me through several local villages including Estreito which is a beautiful village.

In each village I passed through, I refilled my water and often ended up having a conversation with local residents.  The Portuguese are so welcoming.  Maybe because they don’t usually have a strange Englishman yomping through their village.

One such gentleman was really intrigued and after ten minutes of talking, he was keen to introduce me to his filhas [daughters].  At least that was what I think he was suggesting.  Walking towards a house he kept repeating “venha, venha, filhas” [come, come, daughters].  I didn’t really know how to respond, but politely declined and continued on my way.

My second walk of the week took me to the highs and lows of Pedrógão Grande and Pedrógão Pequeno.  Literally the highest point and the lowest point of the two villages.

The Pedrógãos are villages on either side of the Barragem do Cabril, the largest reservoir on the Rio do Zêzere.  The Cabril Dam is soon to be made famous in FastX, the next film in the Fast and Furious franchise.

The Pedrógãos are also on Route N2, Portugal’s equivalent of Route 66.  Route N2 goes from Chaves in north Portugal to Faro in the south.  It is Portugal’s longest road at 739km (453 miles) and a favourite for bikers, van-lifers, motorhome drivers and those who simply want to get the Route N2 “passport” stamped for travelling the route.

My walk wasn’t quite as long, but it was still just over 15km.  The lowest part of my walk was at 240m above sea level.  The highest point is at 520m where the views are stunning.  In total, I ascended 410m.  It was a great walk, taking in the amazing scenery and a variety of picturesque locations.

This is one of the main things I’ve been looking forward to doing in Portgual.  Getting out and walking through a beautiful country.  It’s a significant change to the Fens and Broads in Norfolk, UK.

Shortly after I had started my walk, I received a message that I could view a house later that day.  Fortunately, there was enough time to fit it all in and walking a property with an acre of land just added to the steps!

Rewind to last week though, I visited several properties.  One, in particular, was of interest, but it needed some serious thinking as to whether it would work for me.  Despite having a really good look around with the agents, sometimes you just need a little more time.

Two and a half hours in fact.  Sunday I returned to the property to have a look around the external of the property and the local area.  I’d had a really good look internally with the agent and I knew that would work for me.  But the external land needed some thinking about.

First on the agenda was to walk the perimeter of the land.  Ok, the various pieces of land.  What I have noticed is that often the land size advertised by estate agents differs from reality (sometimes with good reason).  Therefore, I walk the perimeter of the property and its land with a very simple app called Area Calculator for Land.  It does what it says on the tin (or the app).

This really is a no-frills app.  You press start, walk the land, and press stop and save it.  There are no bells and whistles.  No extras.  Just a really simple app that works.  For transparency, I have no affinity with this app or the developers.

While I was at the property, I took a lot more photos and really focused on how I would use the land.  There were quite a few options as some articles (the specific plots of land) were designated as urban, rural and agriculture.  Two of the articles also fall within an area designated as eco-tourism which, if I am correct, means there are fewer limitations on installing moveable structures such as yurts.

These two articles were a short walk away from the property and after walking the perimeter, I returned to the hamlet to what can only be described as a welcoming committee.  The whole hamlet had turned out to greet me.  Ok, all three people!

This was great though as I met everyone who permanently lives in the hamlet.  The neighbour (who also has land to sell) and an elderly couple.  We had a great conversation in broken Portuguese, combined with a little French the wife spoke, too much English they simply didn’t understand, lots of hand gestures and with the support of Deepl Translate (another amazing app which translates to European Portuguese as opposed to Google Translate which is Brazilian).

The neighbours were incredibly welcoming. We chatted for about half an hour.  They informed me of the other local villages and the amenities they have including a small supermarket, café and taberna.  The immediate neighbour also took me on to his land to show off the fruits of his labour (genuinely fruits) and point out a house in the distance where an English couple live.  Exactly which house I have no idea!

Based on the neighbours, I would’ve bought the house immediately.  However, the land just wasn’t going to work for me so I politely notified the agent that was my decision.

Since I’ve been in Portugal, viewing properties is much easier.  Naturally.  However, the main difference I have found is that using a Portuguese phone number it pretty much gets you a response from the agents.  There is one agent who clearly doesn’t want to communicate on any platform (Whatsapp, phone, text or email) but hey, their loss.

The other significant difference is that agents have been much more open with providing the location of properties.  This has been a real benefit as it has enabled me to visit properties and the local areas and cross potential properties off the list.  Substantial time-saving for the agents to as I’m only viewing properties I’ve already visited and viewed from the outside.

A further four properties were viewed and double that number was crossed off the list saving all that time for the agents.

Reflecting on a week of highs and lows

This week really has been split between highs and lows.  Not least the ascent I undertook on my walks.

Thursday was A-Level results day.  Daughter #1 passed all three of her A-levels with a B and two Cs.  So proud you’ve achieved amazing grades following the challenges the pandemic brought.  And finally, a Prom to go to.

Daughter #2 had a successful interview and will be able to earn a little while going to college.  Actually, the job is a bonus as I’ve immense pride in her going to college!

However, my heart and thoughts are with those who are having an incredibly difficult time at the moment.  Thinking of you.

As always, I’d like to thank everyone who reads my blog.  I am humbled by your interest in my little world.  Please do get in touch or reach out by adding a comment below.

2 thoughts on “Walking in central Portugal and being welcomed with open arms.”