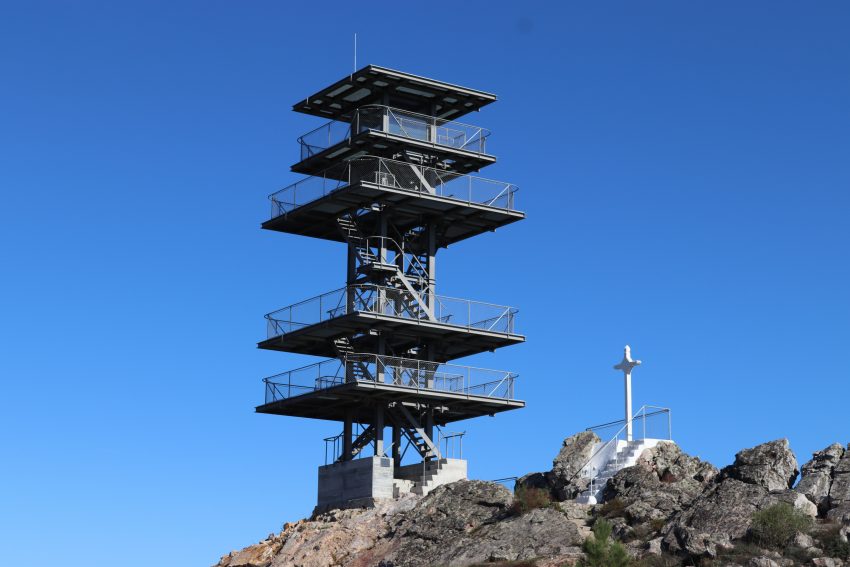 It’s been a while since I put the walking boots on and enjoyed a long hike.  Naturally, I’ve been busy with the house and quinta.  But, with the autumn weather closing in, I took advantage of a beautiful sunrise to head up a mountain.

And, at the top of the mountain, I arrived at probably the best 360° view in Portugal.

The Serra das Talhadas is an unassuming small mountain range in Central Portugal.  It wasn’t a particularly strenuous hike as the highest point, the Chão de Galego trig-point is a mere 614m (2,014ft) above sea level.  Serra das Talhadas has two parallel series of quartzite crests which look like a saw, hence the (almost) English translation to Carved Mountain.

At the base of the mountain, is a small car park and space for five motorhomes or vans. It has great facilities including electricity, water, toilets, showers and a sewage disposal area.  I believe, all free of charge…

The village of Catraia Cimeira has a small supermarket, a couple of cafés, a restaurant, and a petrol station and is only 2km away.  OK, sales pitch over.

Disappointingly though, there isn’t a designated PR route that only covers the mountain although it is part of the longer PNV PR6 route which is an 18km circular hike.  However, there are clear signposts and you can follow the PR6 route for part of the way.

A mountain full of surprises

Just fifteen minutes into my walk, I passed a couple who were harvesting their olive trees.  A couple of minutes later, I was presented with my first surprise.

Embedded on the side of the mountain is a piece of artwork.  This artwork has been created out of coloured climbing ropes hanging between two rock faces.  It looks really impressive and it’s a great focal point on the mountain.

With a quick 180° turn, looking west I get my first amazing view.  But the best is still to come.

Heading up the mountain on a combination of stone and dirt tracks, it’s a pleasant walk.  There is a lovely aroma in the air.  A combination of the pine forest and the growth of vegetation following the recent rain.

As I head off the main track, there are many wild medronho trees with their vibrant red fruits ready to be picked.  I just had to help myself and have a few to boost my energy.  Ah, brings back days of scrumping apples.

By this time, I’ve moved around to the east side of the mountain and I arrive at what must be Portugal’s highest golf green.  Puzzled?  While it looks like a golf green, it certainly isn’t.  It’s the mountain’s hand-gliding and paragliding ramp.

The ramp is overlooked by the trig-point which the brave can climb a couple of steps and get an even better view, and feel, for taking a run off the ramp.  I’m not sure jumping off the side of a mountain is on my bucket list but never say never.

This area also has a few picnic tables and is the starting point of six mountain bike routes heading down the mountain.  They increase in difficulty and end with two “black runs” for the adrenaline junkies!

Finally, I arrive at my destination – the Galego Geomorphological Viewpoint.

Officially, it is classed as a Posto de Vigia, a fire observation lookout tower, and with 360° views, it is a great location to spot any sign of smoke or fire.  There isn’t much information available on the viewpoint although it was opened in 2021 and funded by a grant from the Turismo de Portugal.

Access to the first set of stairs isn’t the easiest, but it’s worth it.  After a few flights of stairs, you reach the top platform.  Stop and just take in the view.  It really is incredible.

On the top platform, is a small glass cubicle which housed a volunteer “watchman”.  On seeing me arrive at the top, he came out and spoke to me.  As always, a conversation in broken Portuguese, but it is a conversation all the same.

I am sure I was the first person he’d seen all day (perhaps all week) so he was keen to show me as many landmarks as he could.  The first one was Sobreira Formosa, the village I live in – 5km as the crow flies, 12km by road.

From there, he pointed out Castelo Branco, the Serra da Gardunha (which is a smaller mountain range) to the north-east and a host of other landmarks.  You can see across to Spain, further into the interior of Portugal.

Within the cubicle, is a small telescope which he used to point out the landmarks.  The final one he pointed out was Portugal’s highest mountain on the mainland, the Serra de Estrela.  Through the telescope, you can clearly see the old radar station domes at the top, some 75km away.

After a few photos and a video, I headed back down the stairs.  Feeling grateful and literally on top of the world.  It was breathtaking.

As I headed down the mountain, I took a slight detour to visit Portas de Almourão [Almourão’s Gates] where they undertake escalada [climbing].  Almost every weekend there appear to be organised climbing events for beginners to the most experienced of climbers.

There are 17 climbs up different sections of the rockface and the meeting point for climbers is, unsurprisingly, underneath the climbing rope artwork.

Called the Farol dos Ventos [Beacons of the Winds], the artwork is made up of coloured ropes on the south-western top of the rock mass called Buraca da Moura.  The shape is defined through a sequence of ropes that progressively vary between red, orange and yellow.  It really is impressive.

There are so many hidden gems in Portugal, although with this one being a mere ten minutes away from home, I can see I am going to be visiting it regularly.  Just the walk was enjoyable, but then the views at the top were stunning.  And who knows, next time I could get the mountain bike out, or even jump off the side of the mountain only to climb back up.

The Serra das Talhadas is definitely worth the visit!  But don’t tell everyone as I don’t want everyone to descend on this beautiful part of Portugal.

Can you better the view?

I feel as though I’ve thrown a challenge out when I claim this is the best 360° view in the whole of Portugal.  If you know differently or can better the view, please do let me know in the comments.

I’d love to be proved wrong.  But somehow, I don’t think it’ll happen.

Go on, prove me wrong!