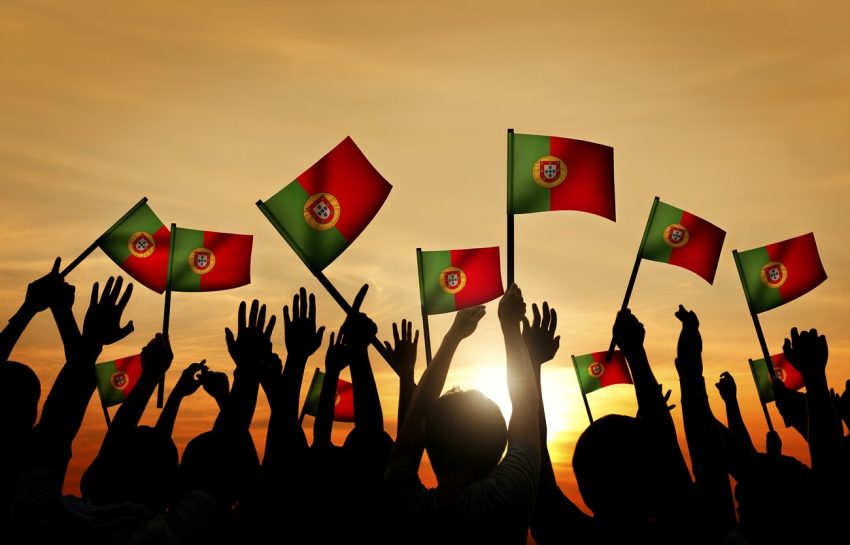 I’ve arrived in Oleiros, Portugal!  And, as someone mentioned to me this week, you’ve got the beaming smile after finding paradise.

The week before I made the road trip of a lifetime was, in some respects, a game of two halves.

The first half was delivering on all my planning.  I was in control.  Every to-do task was ticked off.  I completed the final charity shop delivery.  My last ever trip to the recycling centre.  And a couple of items gifted to my neighbours.

As always, I am overly committed to cleaning the rental property in readiness to hand over the keys to the letting agent.  I honestly believe that the house was cleaner than when I moved in.  In fact, it was probably the cleanest that it has ever been.

But I drew the line at resolving the surface cracks in the plaster and a few other repairs, all of which preceded me moving in.

I was so ahead that with almost a week to go, I had lived out of two rooms after I’d completed the final deep clean in all the other rooms.  Everything was packed and I was beginning to get concerned that I had forgotten to do things.

But on checking my list (I do love a list) all were accounted for.  I had even loaded and unloaded the car to ensure that all my belongings would fit.

Now, this was a massive realisation of how my life was changing.  The last time I moved house, I hired a van and it took three full van loads to move.  The time before, I hired a removal company, and they had a team of six people, a lorry, and a van.

This time, everything I owned was being transported in my car.  Yes, I had a roof box and put the seats down, but it was surreal that when I focused on what I really needed, there wasn’t much.  Indeed, once I get to Portugal, there would be some things I needed to buy like a bed, but everything I own fitting into a single car is impressive.

Being so ahead of my preparation, meant that I was able to spend more time with one of my daughters.  Firstly, she came with me to get a few errands completed.  We managed to slot some lunch in and just enjoy some time together.

Secondly, on the day before I left, we went bowling.  Again, unplanned, but I was beginning to twiddle my thumbs and was honestly, at a loss as to what I could do.  So, knocking down a few pins was most enjoyable.  Sadly, daughter one was working so she was unable to join in the fun.

The last supper and farewells

Finally, we had our last supper.  Even writing now, I am welling up.  It was tough, but again enjoyable.  Great to spend time with them.  I realise it’s been tough for them too. The eldest is less so (or at least she hasn’t shown it) but daughter #2 has struggled a little more.  They are amazing daughters though and I am so proud of them.  They have massive futures ahead of them and I am encouraging them to lead their own lives.

Once we’d had our last supper, the only thing left was to pack the car.  Lock the door, hand the keys back and start the journey to Portugal.

Friday at 9am was the time I’d set myself to hand the keys back.  This was partly to help the letting agent as well as to give me a fixed time.  I was about 15 minutes late.  But that’s pretty good going to pack the car and finish the cleaning of the final room and the final check.

I finally left at 9:30am on the first leg of the trip which would get me to Folkestone.  Given the recent events of 21-hour queues and lengthy delays through passport control, I ensured I was there early.  So early that I managed to get a train two hours before I was scheduled to travel.

I arrived in France and drove off the train at 6:35pm (GMT+1).  As I came to the first fork after leaving the terminal, I headed right.  I should’ve headed left.  Oh well, first error.  Swiftly back on the right route, I made excellent progress until I arrived on the outskirts of Paris.  I know, not the usual route, but the AI SatNav identified major delays on the A28 and who was I to argue!

With the Eiffel Tower in the distance, I was skirting around Paris through the tunnel network.  And then I had to divert.  Remembering I had the bike and roof box on the roof, there was one tunnel where the maximum height was 2.1m.  I was way over that.  Taking the detour, which the SatNav didn’t agree with, I headed through some backstreets of Paris.  My personal compass set in, and despite a twenty-minute detour, I was back on the correct route.

I had every intention of getting to Bordeaux for my “overnight rest” which would mean I’d arrive around 3am.  A little ambitious as tiredness began to kick in around Le Mans so I pulled over for a rest break.  Food, water and forty (maybe twenty) winks later, I was on the road again.

Given it was the early hours of the morning, I was amazed at the volume of traffic on the road.  It was as busy as it had been going around London on the M25.  I guess for many, this was the main weekend for travel through France.

Despite making timely progress, I needed a little more shut-eye, so I pulled into the services around Saintes and managed a couple of hours of deep sleep.  I was back on the road heading to Bordeaux and with good traffic, I’d be in Spain within the next three hours.

I ground to a halt just south of Bordeaux.  What appeared to be a 30km traffic jam.  So much for the AI SatNav now.  I was delayed by a couple of hours (at least).  There was the occasional vehicle broken down (most likely due to overheating with the stop, and start) but other than that, there was nothing particular for the delay.

The 500km plus through Spain went without a hitch.  With the occasional water stops (in and out) and refuelling (me and the car) I was welcomed by the Portugal sign at around 7pm (GMT).  Fist pump.  A clap of the hands.  And a slight tear in the eye.

The final 175km through Portugal was also trouble-free.

I pulled up outside the house around 9pm.  30 minutes later, the car was (almost) unloaded and I was ready for sleep.  First hiccup, no water, so I was on the hunt for the water meter and main water tap.  Located with some assistance from my Brazilian neighbour (who speaks no English and me little Portuguese) I had water.

By 10pm, I was in bed.  Well, a blanket and sleeping bag on the floor.  I woke to the chiming of the village church bells at 7am.

Reflecting on the last 36 hours, I travelled 2,130 km averaging 60km per hour.  The car purred like a dream.  Outside the one delay, I made steady progress.  I was a little deprived of sleep, but not once did I get a numb bum from driving.

4 thoughts on “Portugal. I have arrived!”