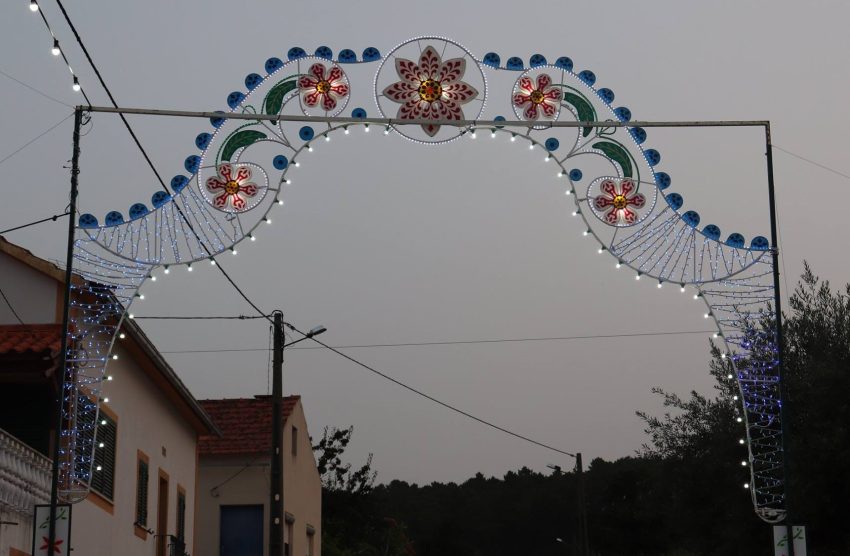 It’s been a week full of activity.  It’s been rather busy, yet sufficiently relaxing.  At times I need to pinch myself that I have only been in Portugal for a fortnight.  Equally, as I adapt to Portuguese time, there is always amanhã.

Last weekend was Festa do Roqueiro.  A weekend of music, song, entertainment, fireworks and a hive of activity.  For such a small village, they put on a fantastic spectacle and extravaganza.

Every entrance to the village was adorned with an archway and the “village square” became centre stage.  The Ganga Banga articulated lorry, which doubles as the stage, arrived mid-afternoon and by 6 pm, they were rehearsing.  I could tell it was going to be a loud evening!

I went for my regular early evening walk through the village and an audience was already gathering.  To be honest, most were sat with a bottle of beer and of a certain age and gender.  I presume this was pre-dinner drinks.

By 10 pm, the party had definitely started and music rang around the village.  Considering the “main act” weren’t due to start until 11 pm, everyone was definitely in the mood for a great night.

I managed to navigate the “pré-pagamento” process to get a drink and found a spot with a great view of the stage.  In typical Portuguese fashion, 11 pm became 11:30 pm, but who cared?  No one.

Ganga Banga is, I believe, a popular Portuguese band.  Clearly, everyone was thoroughly enjoying them as the whole “dance floor” was filled and even those sitting were singing and dancing in their seats.  The objective of a huge village party was definitely achieved.  And even as I left at 1:30 am, the band appeared to be only finishing their warm-up set.  At 2:30 am, I could still hear music!

Sunday morning commences with, what can only be described as, shotguns being fired from the Church.  Twelve huge bangs at nove horas.  I was a little startled especially given that the church is only 100m away from my house.

Day three of the Volta a Portugal (Back to Portugal) cycle race was taking place from Sertã to Colvihã with the riders going through the next village.

I’d previously taken a walk over the serra to see where they would pass the village and I’d identified a spot that would give a great position to watch them race by.  Therefore, on Sunday, rather than walking, I jumped on the bike and genuinely put the mountain into mountain bike.

Arriving a little early from their scheduled time, I was ready with the camera and stood on an elevated position by two road junctions.  It just so happened it was the road junction the GNR motorcycle riders were using as their relay point.  Shortly after I arrived, the first GNR motorbike stopped at the junction.  Soon after the second one arrived, and the first left.  And on it went every couple of minutes the next one pulls up, and the one waiting pulled off.  That was until rider number six needed a natural break and ruined the system.

Twenty minutes later, the pace car came into sight followed by the breakaway riders, a group of about eight.  Then probably a good three minutes behind followed the main peloton.  And the procession of support vehicles.

After five minutes it was all over and I began packing up my stuff ready to head back home when the final two riders and the final support vehicle came around the corner and commenced ascending the hill.  They were clearly struggling and when they got to the road junction the GNR had been using, they pulled over and loaded the bikes onto the support car.  Their race was over.

The remainder of Sunday was being “taught” Portuguese by my neighbours’ five-year-old son.  I knew the book of the First Thousand Portuguese Words would come in useful.  If only for Joao-Pedro to laugh at my pronunciation.  But it was entertaining!

This week has been a combination of walking and property viewings.  With the occasional swim thrown in as well.

Monday and Wednesday consisted of walking two of Portugal’s signposted routes.  Both ended up being around 8km in distance and both had ascents of more than 300m.  Step counts smashed both days.

In fact, since moving to Portugal, my step count is now averaging just over 10k steps a day.  By comparison, some days when I was working (sat or slouched at a desk all day) I would barely get past 2,000 steps.  Walking, swimming, cycling and small changes in diet, I am 8kg lighter – despite all the extra water I am drinking.

Tuesday and Friday were two solid days of property viewings.  Some are of interest, some definitely not.  One which is making me think.  Not exactly what I was looking for but, keep an open mind.  I just need to work out whether it will work for me.

I’ve also visited several other villages that I’ve seen properties advertised in as part of my ongoing orientation and considerations.

Thursday was due to be internet day.  As promised, the engineer contacted me at 8:30 am (the time they said he would) and he arrived 45 minutes later.  He checked the property and advised the nearest cable exchange was there – as he pointed to the telegraph pole 30 metres away.

“But we have a problem” he continued, “there are no free cables so an engineering team need to put a new cable in from the main road which will be around 200 metres”.  And off he went.

No more than 30 minutes later, I had a text to advise that the engineering team would complete the work within the next seven days and they would then advise when they will return to the house to install fibre.

Once again, I’ve been really impressed with the service from a Portuguese company.  I ordered the fibre broadband on Friday and they attempted to fit it the following Thursday.  While they were unable to fit, they have messaged and appear to already scheduled putting a new cable into the village (which will clearly help more people in the village and not just me).