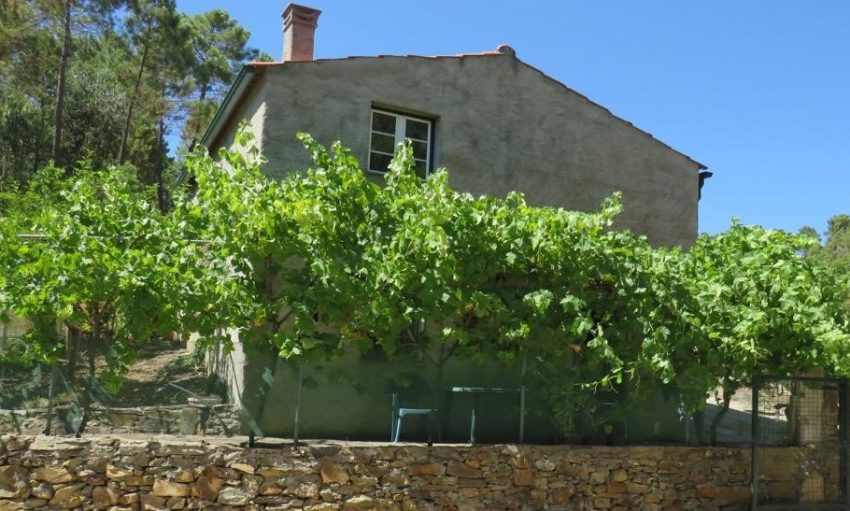 It’s official.  I am a property owner in Portugal.  And it’s an amazing feeling!

But it has been a busy couple of weeks.  And, at times I have needed to hold my nerve.  It hasn’t been straightforward although part of this has been self-inflicted.

I bought a quinta in Portugal

I am the proud owner of a small quinta [farm] in the Proença-a-Nova municipality, Central Portugal.  It has been a few overwhelming days since I got the keys and unlocked the gate and front door.

Apart from some general tidying up and cleaning, I’ve not really done too much.  I’ve just taken the time to appreciate the property, land, outbuildings, location and tranquillity the quinta brings.

The previous owner kindly spent time with me to explain a few things such as the wells, water pumps and irrigation system.  And has kindly agreed to be “on hand” for any questions that might arise.

Nestled on the side of a hill, it is one of several smallholdings in the locality.  Judging by the olive groves, vineyards, vegetable patches and fruit forests, the others are well-managed and regularly tended to.  The rolling hills (they are hills, not mountains) are home to a pine forest although it is not dense.  There are two villages, both with cafes, less than 500m away.

I’ve walked the 6,000 plus sqm many times to just understand all the various areas and the variety of plants, fruit, vegetables, and infrastructure.  One of the buildings has been used as the adega [wine cellar] with all the wine made at the quinta.

As I’ve walked around the land, I’ve had a notebook and pen in hand I’ve scribbled down lots of observations.  At present, they are exactly that, observations as opposed to a to-do list (oh, how I love a good list).

Across six defined areas, there is a vineyard (as well as vines throughout the quinta), two olive groves, a madronas orchard [strawberry tree], a main and secondary vegetable patch, and an area with fruit trees.  The list of trees is long but includes apples, oranges, figs, quinces, cherries, loquats, persimmons, plums, pears and lemons amongst others.

It’s definitely going to keep me busy.  There is a lot of work, but I’m looking forward to it.

The eagle-eyed of you though will notice I haven’t mentioned anything about the house.  That is because there is no house.  There are agricultural support buildings although there is no habitation licence which means I can’t live at the quinta.

No, I’m not going to rebuild a ruin nor am I going to be living in a caravan (or tent).  Although there is enough room for a park up and all the facilities I would need.

But it’s ok, as I bought a village house too.

“You don’t do things by half” is a comment someone made when I told them about buying a quinta and a house.

It’s a traditional house, built in local shist stone, although the three bedrooms are larger than most Portuguese rooms.  It needed updating, redecoration and the installation of appliances.  As well as a little attention to the plumbing (and one leak I’ve caused myself – I never knew my own strength!).  It has a small courtyard area for morning coffee.

The house is in a much larger village just less than 2km away from the quinta.  The village has all the amenities including cafés, restaurants, a library, a health centre, a museum, and various shops.  Indeed, I’ve got to know the local builder’s merchant incredibly well.

The deed on the house was signed three weeks ago, so I’ve managed to complete most of the work.  I am just waiting for a huge favour from a friend and the delivery of the appliances.  Within the next week, I expect to have moved in.

It wasn’t the plan to buy two properties, but this ended up being the best solution for me.

Best of both worlds

As my property search has progressed, I have kept my options open.  I’ve described my approach as unorthodox several times and I believe this has helped me in my search.

The more properties I viewed my priorities evolved.  And I was finding it difficult to find the right property, in a suitable locality, at the right price (prices are rising quite considerably in specific areas).

So, in buying two properties I believe I have got the best of both worlds.

I have a village house which has all the amenities that I will need (and more) and an active community.  I currently live in a small village and now the festas have ended it is simply, too quiet.  Some days I can go the whole day without seeing anyone in the village.

Moving to a larger village where everything is within walking distance and has a real community feel became much more important.  Even though I have not yet moved in, a few people have come and introduced themselves.  I’ve met the President of the Junta de Freguesia [Parish Council] and am gradually visiting all the local cafés (I still have a few to go). The President kindly helped arrange for the chimney to be swept – which was completed within a week.

At the quinta I’ve got, in my opinion, a super plot of land which needs a fair amount of work, yet it is already producing a large quantity of food.  It’s also got flexibility with the support buildings and lots of potential options.

In addition, with the quinta being within walking or cycling distance, it is easily accessible.  And being just outside the village means I will get out of the house every day and have a greater purpose to integrate into the local community.  And there is an award-winning Praia Fluvial (just) within walking distance.

Finally, my approach is not dissimilar to that of many Portuguese people where their land is separate from their home, although I know this is not the approach that most immigrants take.  Indeed, until I arrived and lived in Portugal for a few months I had a similar view.

The adventure has begun

With the keys in hand (and there are a lot of keys), the house (almost) finished and a great quinta to help me become self-sufficient, it really feels like the magic of new beginnings and my adventure in Portugal has started with a vengeance.

Next stop…. My appointment with SEF which is the final stage of my D7 Visa being granted.

If you’ve got this far, thank you for reading my blog.  I continue to be humbled and grateful to everyone who is following my adventure in Portugal.

Please do get in touch or reach out by adding a comment below.