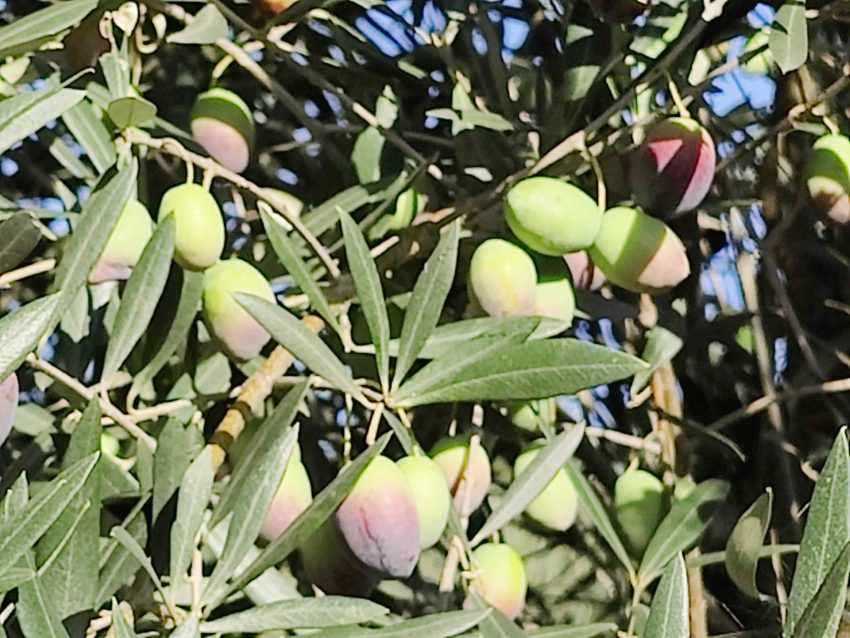 I’ve still got a lot to learn about azeitonas e azeite de oliva [olives and olive oil].  An awful lot.  But I’m pretty pleased with the progress so far.

A year ago, did I really believe I would be pressing my own olive oil?  Honestly? No. Not least because I didn’t have a clue about olives.  And it will take time to learn.  I still don’t know much about olives, but I’m learning!

But I have my own olive oil! Amazing.

The last fortnight (I know I skipped the weekly blog) has been hectic.  There have been times when it’s been a little tough too.  Mainly due to the weather.  Rain, more rain and even more rain.

Harvesting my olives has been fun.  Well, it was fun for the first few trees.  But, then the enormity of the job in hand began to dawn on me.  And after an hour, I’d not really made much progress.

I’m lucky that I have three designated olive groves, aptly named East Grove, West Grove and South Grove.  Original names hey?  And I decided to start on West Grove.  The reason being is that this is the youngest grove, not all the trees had produced fruit, but those that did had an abundance of small olives.  Lesson one – small olives tend to have the most oil.

I actually made pretty good headway on West Grove.  Mainly because most of the trees are no taller than me.  So with a little bit of stretching, I managed to harvest these relatively quickly.

However, the larger trees straddle two terraces so this makes it much more tricky to get the net underneath the tree to catch all the falling olives.  But after the first few, I felt I was winning.

When I moved on to the East Grove, it followed a similar pattern to the West Grove.  The smaller trees were relatively quickly harvested.  The larger trees, which have the most olives, straddle a wall and are on a slope.

To stop the olives rolling away I built a couple of tripods that enabled me to raise the net to compensate for the slope.  Oh, I was chuffed with myself!  But it is time-consuming putting the net out, moving the tripods and ensuring that a couple of tears in the net were folded over so I didn’t lose olives.  (Every olive counts!)

Overall, I was making good progress with only the South Grove to finish.  And a day to complete this.  The South Grove is made up of more mature trees, most of which have larger olives which are most suitable for brining.  However, with a good quantity already being brined and prepared for eating, the remainder will be used for oil.

Lesson two – you can’t pick olives in the rain!  Throughout my preparations for the olive harvest, I have become a close watcher of the weather.  According to various weather apps, had a window of three days to pick the olives.

So day three started early in South Grove.  And again, I was making good progress.  But so were the rain clouds.  And, with two and a half trees still to harvest, it was rain-stop play.  I was gutted, but I’d done damn well to get as far as I had.

The two trees I didn’t manage to harvest have the largest olives (most suited for eating) so I’ll keep a watchful eye on them and harvest them as they ripen (turn purple or black) and attempt to cure them.  Lesson three – ripe olives are much more bitter and therefore take longer to cure them.

The final stage of the harvest was to remove all the leaves and bag the olives.  As I don’t have a machine for separating the leaves, I set up a gravity-fed system.  It worked and within a couple of hours, all the olives were bagged and the leaves removed.

Lagar or lager? Or both?

The next stop is the lagar.  I’ve been in contact with CoopMoitas, my local olive cooperative.  Once again, I have had a great experience working with them despite it being delayed by a week.

Naïve to the process I turned up at my allotted time and the lagar was a hive of activity.  Through my broken Portuguese, a little French and even less German, I realised they were running behind so I returned an hour later.

Once back at the lagar I still had to wait an hour but this enabled me to watch the process.  It is pretty impressive.  The three workers have a great system and clear responsibilities.  And boy, do they work hard.  Despite this, there was a jovial atmosphere.

Finally, it was my turn.  My only job was to put the olives in the loading chute.  Job done.

Then I just stood back and watched as they go through the first machine which shreds the olives.  Then on to the macerator which mashes olives into a pulp.  From here, the pulp is put onto mats which are stacked on top of each other ready for the press.

There are three presses and each one is allocated to a different customer.  Gradually my oil is coming out and being fed into the collection vessel.  From here, it is separated and goes through a process including heating and cooling although I need to learn a lot more about this process.

Every step through the process the workers kept me up to speed on the progress and, nearly five hours after I arrived, my oil was being pumped into containers.

At this stage, the oil is graded and I was delighted to be advised that this year’s oil is grade one, extra virgin olive oil.  The highest quality.  I bet they say that to everyone!  But it does taste good!

After two and a half solid days of picking olives (a total of 164kg) and a day at the lagar, I ended up with 28 litres of olive oil.  I’m delighted, I learnt a lot and feel much more knowledgeable about the process.

Arriving back from the lagar around 8pm, I treated myself to a lager at one of the local tabernas.

Over the last fortnight, I have continued to harvest other vegetables and fruits.

This has included peppers and cabbage which I’ve made into soups (with a few shop-bought carrots, sweet potatoes and ginger), and a few potatoes.

I have a few passion fruit, pomegranates and lots of oranges.  Slicing oranges reminds me of half-time oranges when I played football, rugby and hockey.  But I definitely don’t recall them being as juicy as freshly picked. I need to work out what I can do with pomegranates!

Finally, I’ve picked enough medronhos to fill a barrel so time will tell how that turns out.  And the olives I am curing have now moved on to the next stage where I am now brining them in salt water, changing it every week.  Likewise, time will tell on my efforts.